Some Facts on Byzantine Iconography 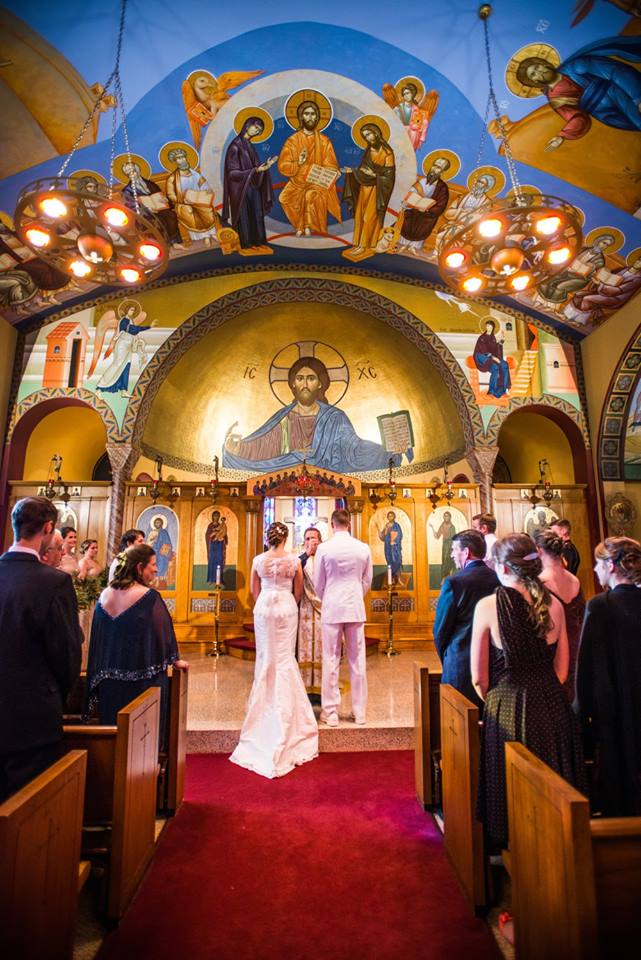 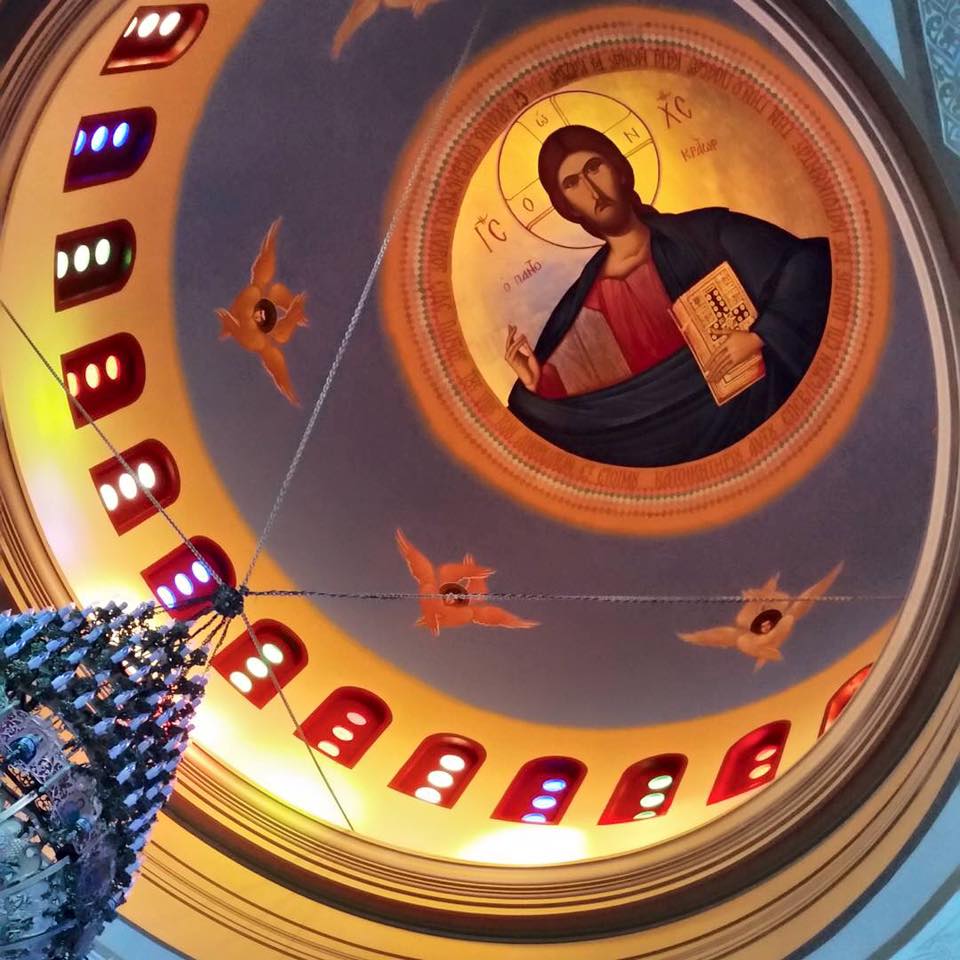 The Resurrection Icon: The Central Icon of our Faith

The Icon of the Resurrection of our Lord and Savior Jesus Christ is technically the Icon of Christ’s Descent into Hades, but is commonly called the Anastasis or Resurrection Icon. It is the visual Gospel, the Holy Scripture written in form and picture, for all to participate in the Good News of this event.

The Icon of Christ’s Descent into Hades is not a photojournalists recording of what took place in the bowels of the earth, but rather a spiritual representation of the significance, reality and importance of what Christ accomplished. Many of the elements that we see come from the apocryphal Gospel of Nicodemus and although the details vary from icon to icon, the essential elements remain the same:

This is the quintessential icon for the Orthodox faithful because in it is the fulfillment of God’s purpose for humanity. It speaks of the Restoration of Adam (and all humanity) into communion with God and tells of the Awesome Victory over Death.

“To earth hast Thou come down, O Master, to save Adam
and not finding him on earth, Thou hast descended into hell, seeking him there.”

The Icon of the Nativity

One of the most famous icons is that of the Nativity. Its symbolism is that of the Creator of the Universe entering history as a newborn babe. The little helpless figure in swaddling clothes represents the complete submission of Christ to the physical conditions governing the human race. Yet he remains Lord of Creation. The angels sing praises. The Magi and the shepherds bring their gifts. The sky salutes Him with a star. The earth provides Him with a cave. The animasl watch HIm in silent wonder and we humans offer Him one of us, the Virgin Mother.

The lower scenes underline the scandal of the incarnation. The right hand scene shows the washing of the infant by the midwife and her assistant. It tells that Christ was born like any other child. The scene on the left protrays Joseph, who, having observed the washing of the infant, is once again assailed by doubts as to the virginity of his spouse. He is tempted by the devil, who suggests that if the infant were truly divine He would not have been born in the human way. The Mother Mary is in the center, and from her reclining position looks at Joseph as if trying to overcome his doubts and temptaitons.

"O Divine Lord of all that exists, You have illumined the Apostle and Evangelist Luke with Your Most Holy Spirit, thereby enabling him to represent the most Holy Mother; the one who held You in Her arms and said: 'The Grace of Him Who has been born of me is spread throughout the world. Enlighten and direct our souls, our hearts and our spirits. Guide the hands of your unworthy servants, so that we may worthily and perfectly portray Your icon, that of Your Holy Mother and of all the saints, for the glory and adornment of Your Holy Church. Forgive our sins and the sins of those who will venerate these icons, and who, standing devoutly before them, give homage to those they represent. Protect them from all evil and instruct them with good counsel. This we ask through the prayers of the Most Holy Theotokos, the Apostle Luke, and all the saints, now and ever and unto ages of ages. Amen."

"The Nativity is a now moment for us," says Father Anthony. "‘Σήμερον Χριστός Γεννάται.’ Today Christ is Born! 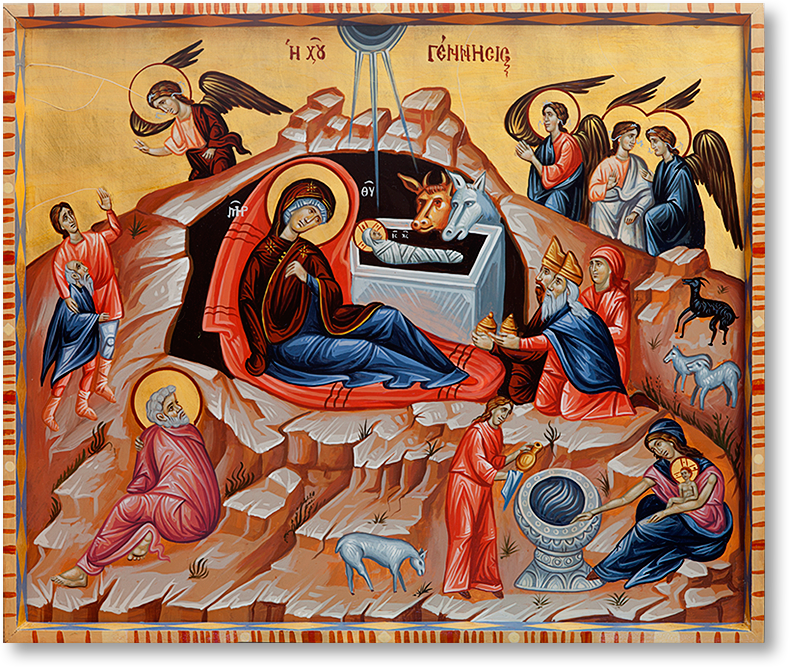 When parishioners enter the church this Sunday, they will see a church transformed — rich in vibrant red, blues and gold and flowing with visual symbols of the Orthodox Christian faith.

All week, the Rev. Anthony Salzman, a visiting priest and noted creator of Orthodox icons, has been at the church on W Street installing a series of Christian icons behind the church altar.

The icons seem to spring to life from the now color-filled east wall — especially the large icon of the Virgin Mary with a young Jesus on her lap. To their sides, the angels Gabriel and Michael bow in adoration, while depictions of Moses, Elijah and two bishops of the Orthodox church — St. John Chrysostom and St. Basil — complete the series.

Salzman said the icon of Mary with the young Jesus is called "Platytera,'' or "She Who is More Spacious Than the Heavens," because "the creator was contained in the Virgin Mary, so therefore she is more expansive than the universe."

Byzantine iconography is a time-honored tradition of the Orthodox Church and faithful believe St. Luke the Evangelist was the first iconographer. Icons are not just works of art for believers, "but vehicles of worship and faith," Salzman said. "That goes with the theology of the church — when you enter the church you're leaving time and space and entering eternity, the Kingdom of God."

Salzman said that worshippers don't just view icons, they "interact" with them.

Unlike most traditional art, iconography utilizes reverse perspective, wherein the picture seems to (wrap around the viewer rather than recede back into space). This allows the person viewing the icon to become a focal point in that it appears the image is coming out toward the viewer.

Salzman created the icons on panel rolls in his Athens, Ga. studio. He began the work in April. He brought the panels to Pensacola on Sunday night and has been affixing them to the wall ever since, touching up spots along the way.

The icons are made using acrylic paints and gold leaf.

Salzman studied Byzantine Iconography and Byzantine Art History in Greece. He is the presiding priest at St. Philothea Greek Orthodox Church in Athens.

The Rev. David Bleam, pastor of St. Andrew, said the church commissioned the icons to "enhance our faith.''

"We wanted to have as much artistic representation of our faith as possible," Bleam said. "It inspires us in that we realize that there is more to the material world than we are cognizant of."

Bleam said the altar icons are just the first stage of iconography that will go up at the church. Eventually, religious icons will fill much of the church, including the dome in the middle of the church.

"The icons teach us,'' Bleam said. "They call us to worship and to glorify God.''

Church members have not seen the full iconography that Salzman has installed, though a few have seen bits and pieces during the week.

"What I've seen is just beautiful,'' said church member Dorothy Tampary. "I can't wait to see the complete work. I just know that when most of our parishioners walk in and see it for the first time, they're going to be very impressed.''