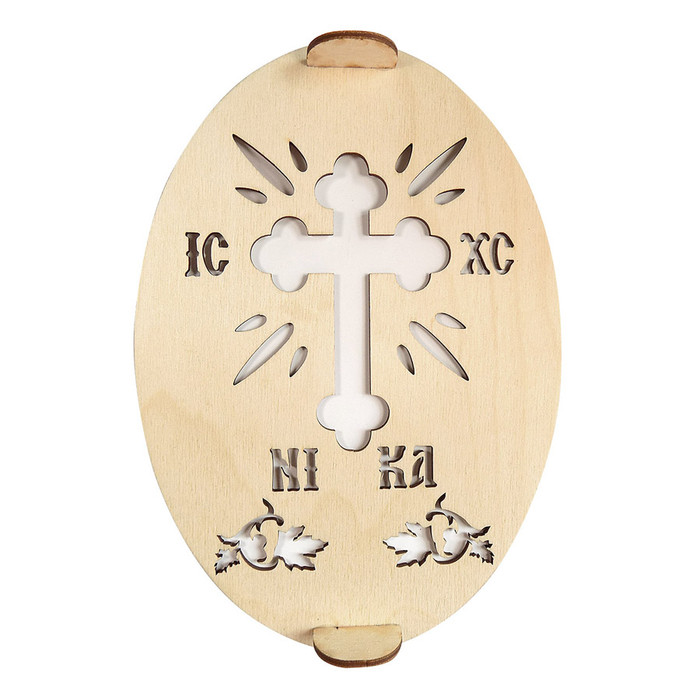 This stencil helps you make a beautiful presentation with your koliva offering.   Place it on top of your smooth powdered sugar "canvas" and dust with cinnamon so that when you carefully lift the stencil the beautiful design will be left.  Continue to embellish you koliva with borders made out of walnuts, almonds or raisins as desired.

Koliva, also spelled kollyva, kollyba or colivă, is a dish based on boiled wheat that is used liturgically in the Eastern Orthodox Church for commemorations of the dead.

In the Eastern Orthodox Church, koliva is blessed during funerals, as well as during the memorial service (mnemosyno) that is performed at various intervals after a person's death and on special occasions, such as the Saturday of Souls (ψυχοσάββατο). It may also be used on the first Friday of Great Lent, at Slavas, or at mnemosyna in the Christmas meal.

The primary ingredient is wheat kernels which have been boiled until they are soft, they are drained very well and spread on a cloth to be just moist, and then sweetened with honey or sugar. Koliva also contains some or all of the following: wheat, sesame seeds, almonds, ground walnuts, cinnamon, sugar, pomegranate seeds, raisins, anise and parsley. It is traditional to decorate the top with cross or floral motifs, initials of the deceased, even elaborate icons made from colored sugars.

Orthodox Christians consider koliva to be the symbolic of death and resurrection, according to the words of the Gospel:

Verily, verily, I say unto you, Except a grain of wheat fall into the ground and die, it abideth alone: but if it die, it bringeth forth much fruit. (John 12:24)

Wheat which is planted in the earth and rises in new life is symbolic of those beloved departed who have died in the hope of resurrection, in accordance with the words of Saint Paul:

"More Spacious than the Heavens" -Pk of 50